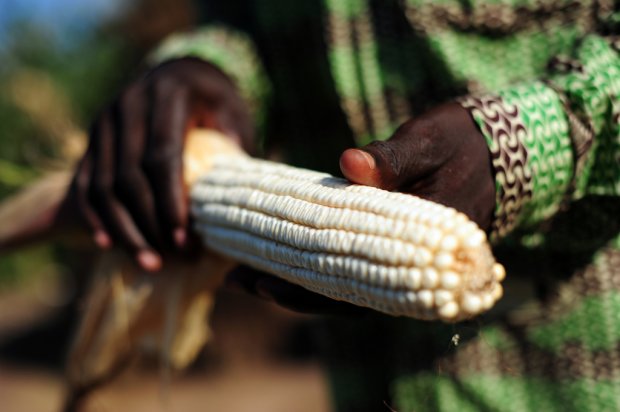 Source: CCAFS
With its largely untapped land-resources for agriculture expansion, could Africa really be the world’s next low-carbon breadbasket? New article argues probably not, at least not for the global population. This as farmland conversion of important wet savannahs and shrublands will come at a much higher environmental cost than previously realized. Key lesson is that Africa’s croplands should be prioritized to secure enough food for the continent, and not staple exports or bioenergy needs.

The article, published today in Nature Climate Change, explores what a conversion to either food crops or bioenergy production would mean for the Guinea Savanna,a wet savannah, wood- and shrubland zone covering a large part of the African continent.
Often referred to as an area with high potential for agriculture expansion, especially maize and soybean production at low environmental costs, the new study contrasts these arguments as it finds that only a small percentage of the Guinea Savanna has the potential to be a low-carbon source of these crops. Authors argue that global studies have overestimated the quantity of potential cropland through assessing overly low carbon and biodiversity costs.
“The research shows that Africa should not be viewed as a low environmental cost way of feeding the world or supplying it with biofuels,” says co-author Philip Thornton, Leader for CCAFS Flagship on 'Policies and Institutions for Climate-Resilient Food Systems', “this as only a tiny fraction of land, even with high inputs, is likely to result in one third less carbon per ton of crop than the global average."
The research finds that approximately 2% of the wet savannah, called wet as it provides enough rainfall to sustain agriculture, could be a low carbon source for maize, and for soybean, only around 10%.
In addition to meeting global food needs, the region has also been portrayed as a considerable land source to produce low-carbon biofuels to meet European standards of greenhouse gas reductions. The article demonstrates however that less than 1% of the land is likely to produce enough cellulosic ethanol to cover Western countries’ green needs.

The conversion costs go well beyond carbon though, as loss of trees, shrubs and other natural habitats will spell extinction or displacement for many of the mammals and birds now living there.
“Agriculture conversion always has a large impact on local biodiversity,” says lead author Timothy Searchinger, Research Scholar at Princeton University. “For the Guinea Savanna, which has natural reserves that can be compared to the world’s largest tropical forest regions, these losses will come at a very high prize.”
"That does not mean the land should not be touched, but it should be reserved for Africa’s critical needs and there should be a focus on those lands where the costs are as low as possible relative to the crop benefits,” he continues.

Although crop intensification has started in many African countries, and agriculture is back as a top priority on Governments’ agendas as a route out of poverty, the continent needs to produce yield growths that far exceeds their own continental needs, before being able to offer low-carbon lands that can help contribute to global staple crop and green-energy needs.
Data from FAO show that in order for Sub-Saharan Africa to become self-sufficient in food production, the continent has to increase production of crop calories to 4.2 times that of 2007 levels. This will not only mean intensifying crop production on existing cropland but also expanding farmland by app. 140 Mha.
As the population is growing, further farmland expansion will be needed in order to meet the mounting food demand.
A look at the ratio of carbon lost from the formation of croplands relative to their crop output is a useful way to ensure cropland expansion is done as efficiently as possible. This measurement compares the carbon lost with the quantity of yield gained.
“The carbon conversion efficiency ratio is not always taken into consideration while planning agriculture expansion,” says Philip Thornton, also lead researcher with the International Livestock Research Institute (ILRI). “If policy-makers compared environmental costs with total yield benefits, as well as explored technologies to intensify current agricultural production, more sustainable choices regarding Africa’s landscape could be made.”
The continent's own food needs have to take the front seat, especially in a world where the climate is increasingly variable and extreme, while the true environmental costs and human benefits have to both be taken into consideration when formulating agriculture-related policies. In parallel, policy-makers have to continue to look at available climate-smart farm practices and resources that can support smallholders improve yield efficiency on current land.
Read op-ed by lead author Timothy Searchinger and co-author Philip Thornton in This is Africa: Dispelling the ‘breadbasket’ myth about African agriculture
Photo credit: N.Palmer (CIAT)