Chair-elect announced for the Global Forum on Agricultural Research 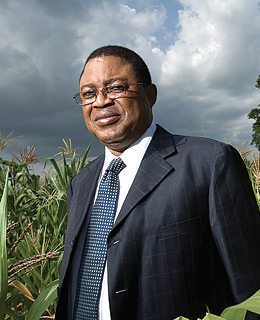 The multi-stakeholder Steering Committee of the Global Forum on Agricultural Research met this weekend in Alexandria, Egypt and selected Dr Jones from among a very strong field of candidates. The current Chair, Prof. Adel El-Beltagy of Egypt, will hand over the charge to Dr Monty at the closing session of the Global Conference on Agricultural Research for Development (GCARD 2010), in Montpellier, France, March 28-31, 2010 (http://www.gcard2010.net).

Dr Jones was co-winner of the prestigious World Food Prize in 2004, for his work on the development of the New Rice for Africa (NERICA) with important physical traits for weed suppression through vigorous and spreading growth and higher levels of resistance/tolerance to major biotic and abiotic stresses. The new rice varieties give higher yield, taste good and offer great promise for improving rice productivity for poor farmers in Africa.

A recipient of an honorary Doctorate of Science from the University of Birmingham, Dr Jones has also received awards such as the Insignia of the Grand Officer Award from the order of the Rokel, Sierra Leone; the National Order of Merit Award from Côte d’Ivoire; and the King Baudouin Award given to WARDA by the CGIAR.

In 2007, he was listed as one of the 100 most influential people in the world by the New York Times.

In thanking the Committee for his appointment, Dr Jones highlighted the value of GFAR in advocacy for the value of agricultural research in development and the need for investment in this critically important sector if we are to meet international development goals in poverty, hunger and nutrition.  He also highlighted the value of GFAR in mobilizing all those who care about the future of agriculture to create effective changes in agricultural research systems around the world to enhance their impact in development and ensure that these are truly in tune with both the real demands of those served by agricultural research and those who provide the enabling resources.  He also called for a more pro-active view in the research community, to better anticipate and address future challenges and changing circumstances, in which GFAR has a major role to play in mobilizing concerted actions globally, for the benefit of local producers and consumers.

Dr Jones also highlighted the need for change in the CGIAR international agricultural research system and appealed for international centers and CGIAR members to join with those working at national and regional levels to make GFAR and the GCARD effective instruments for assuring the relevance and directing the evolution of the whole global agricultural research community, a role recognized in the recent G8 L’Aquila Statement on Food Security, 2009.

Current GFAR Chair, Prof El-Beltagy, said that the selection of Dr Jones will greatly strengthen GFAR as Dr Jones comes with a strong commitment to further enhance the work of GFAR and its constituencies to make a difference in the livelihoods of resource poor farmers. In the current global scene, with the shadow of world food crisis, financial crisis and the climate change, the prime task ahead is to optimize the linkages between the different partners in agricultural research for development through a dynamic platform (GFAR). He expressed his great confidence in Dr Jones to work in the future with the GFAR Steering Committee and other partners in research for development to successfully achieve the noble objectives with which GFAR was created.