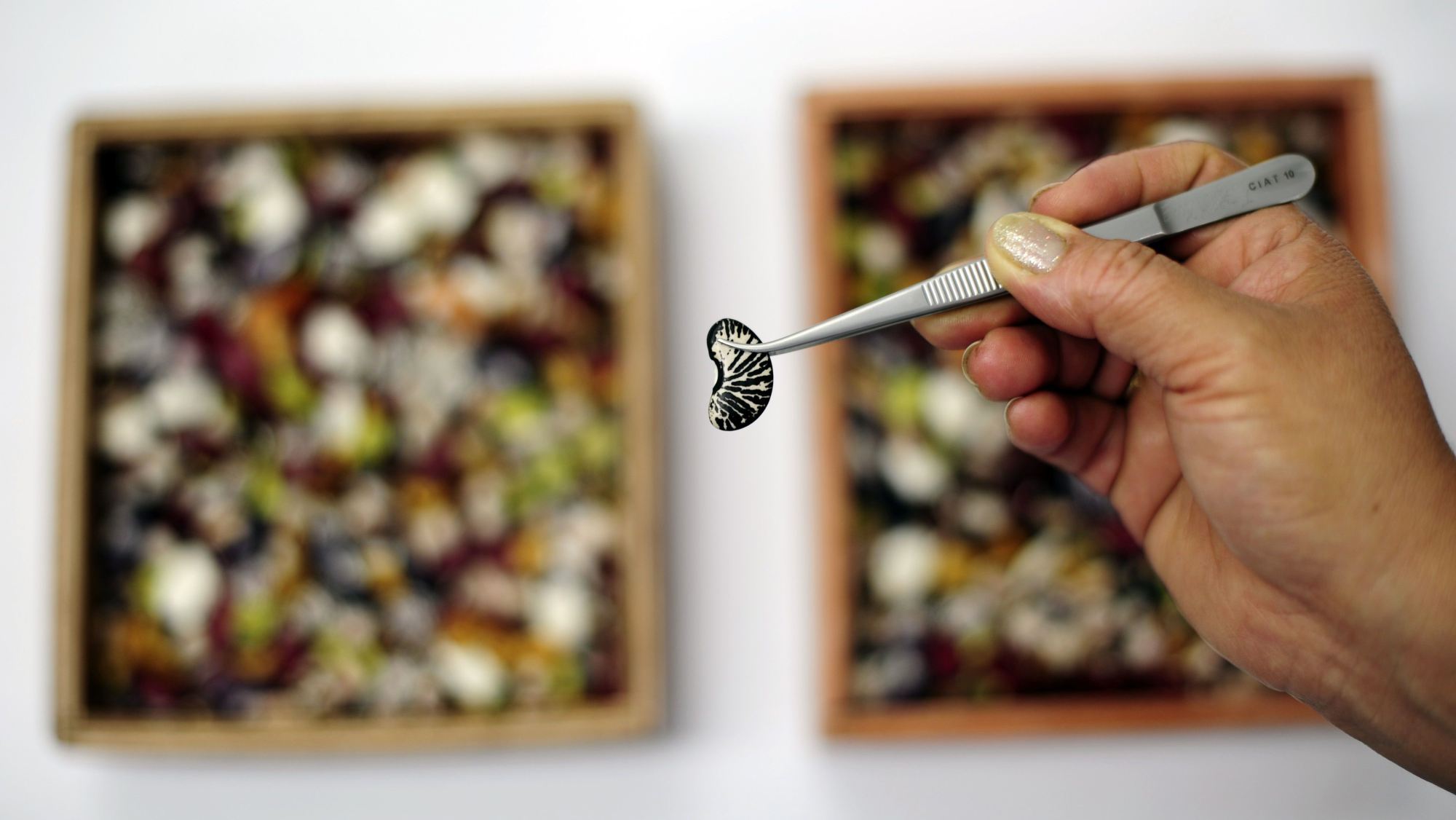 Source: CGIAR
As a result of a major breakthrough, beans – once feared to be a casualty of climate change – are now set to withstand extreme temperatures, protecting a staple food of the poor in developing countries.
Amidst fears that global warming could zap a vital source of protein that has sustained humans for centuries, CGIAR bean breeders announced today the discovery of 30 new types, or lines as plant breeders refer to them, of “heat-beater” beans that could keep production from crashing in large swaths of bean-dependent Latin America and Africa.
“This discovery could be a big boon for bean production because we are facing a dire situation where, by 2050, global warming could reduce areas suitable for growing beans by 50 percent,” said Steve Beebe, a senior CGIAR bean researcher.
“Incredibly, the heat-tolerant beans we tested may be able to handle a worst-case scenario where the build-up of greenhouse gases causes the world to heat up by an average of 4 degrees Celsius (about 7.2 degrees Fahrenheit),” he said. “Even if they can only handle a 3 degree rise, that would still limit the bean production area lost to climate change to about five percent. And farmers could potentially make up for that by using these beans to expand their production of the crop in countries like Nicaragua and Malawi, where beans are essential to survival.”
CGIAR researchers had previously warned that rising temperatures were likely to disrupt bean production in Nicaragua, Haiti, Brazil, and Honduras, while in Africa, those warnings had focused on Malawi and the Democratic Republic of the Congo as the most vulnerable, followed by Tanzania, Uganda, and Kenya.
“As a result of this breakthrough, beans need not be the casualty of global warming that they seemed destined to be, but rather can offer a climate-friendly option for farmers struggling to cope with rising temperatures,” said Andy Jarvis, a CGIAR climate change expert.
Many of the new heat-tolerant beans developed by the CGIAR scientists are “crosses” between the “common bean”—which includes pinto, white, black, and kidney beans—and the tepary bean, a hardy survivor cultivated since pre-Columbian times in an area that is now part of northern Mexico and the American southwest.
Often called the “meat of the poor” for the affordable protein it provides, the crop is a vital foundation of food security for more than 400 million people in the developing world. Beans are a highly nutritious food, offering protein, fiber, complex carbohydrates, vitamins and other micronutrients. In addition to heat tolerance, CGIAR experts are simultaneously breeding for higher iron content to enhance the beans’ nutritional value.

The new beans are a landmark result of urgent efforts by CGIAR to develop new crop varieties that can thrive in drastic weather extremes. The bedrock of this research is CGIAR’s “genebanks”, which preserve the world’s largest seed collections of humanity’s most important staple crops. Using new genomic tools, plant breeders are now better able to unlock the potential of the genebanks’ vast genetic diversity by probing nearly 750,000 samples of cereals, legumes, roots and tubers, trees, and other important food crops—along with their wild relatives—to identify genes with traits like heat, flood, and drought tolerance or resistance to pests and disease that can help farmers adapt to environmental stresses.
“The payoff we are seeing from these bean breeding efforts underscores the vital importance of investing in CGIAR’s genebanks—a front-line defense in the race to adapt crops to climate change to protect the staple food supplies of poor farmers and consumers and avert food crises around the world,” said Jonathan Wadsworth, Executive Secretary of the CGIAR Fund Council. “The development of these heat-defying beans also highlights what can be achieved when we invest in modern science to find solutions to urgent challenges, with expected economic benefits vastly exceeding the costs of investment in the research.”
The heat beaters emerged from the methodical and exhaustive testing of more than 1,000 bean lines, work that originally started as an effort to develop beans that could tolerate poor soils and drought. The focus turned to heat-tolerance following an alarming 2012 report from CGIAR scientists warning that heat was a much bigger threat to bean production than previously believed.
Led by CGIAR researchers, a team of the world’s leading bean experts quickly moved to cultivate test plots on Colombia’s Caribbean coast, where they deliberately exposed beans to night-time temperatures well above what they can normally tolerate. Scientists also established greenhouses so that temperatures could be dialed up on demand.
“We confirmed that 30 heat-tolerant lines are productive even with night-time temperatures above 22 degrees Celsius (about 72 degrees Fahrenheit),” Beebe said. “Normally, bean yields start to falter when the temperatures exceed 18 or 19 degrees Celsius (about 64 to 66 degrees Fahrenheit).”
Among the beans found to be especially heat tolerant was one that was recently introduced into commercial production in Nicaragua, chiefly because of its performance in drought conditions. Tested in dry conditions in Costa Rica, it yielded more than twice the amount of beans compared to what farmers were currently cultivating. Beebe said scientists now have evidence that the superior performance was due not just to drought tolerance but also heat tolerance.
“What this shows us is that heat may already be hurting bean production in Central America far more than we thought and farmers could benefit from adopting the new heat-beater beans right now,” he said.

To provide a sustainable and cost-effective way to combat hidden hunger, caused by diets low in key vitamins and minerals, CGIAR researchers embarked more than a decade ago on a pioneering program to improve the nutritional content of staple food crops that the poor rely upon.
Some of the heat-tolerant beans identified by Beebe and his team have also been deliberately bred through conventional methods to be higher in iron in an effort to tackle malnutrition. In developing countries, deficiencies of this essential micronutrient afflict one out of every two preschool children and pregnant women, making them highly susceptible to anemia and compromising children’s growth and cognitive development. While beans are already high in iron, these new varieties could eventually provide up to 60 percent of daily iron needs for women and children—almost twice the iron of non-improved beans.
“A couple of years ago, when climate change experts warned that rising temperatures could be devastating for bean production, we were asked how this would affect high-iron beans,” said Beebe. “Now, I am confident that we can confront this challenge as well. We can develop more iron-rich beans that are also heat tolerant. These beans would deliver even greater benefits than expected because they could be grown more widely.”
Read the report Developing Beans that Can Beat the Heat
Photo credit: Neil Palmer, CIAT