Empowering women in agriculture: rethinking agricultural needs and actions through the eyes of women 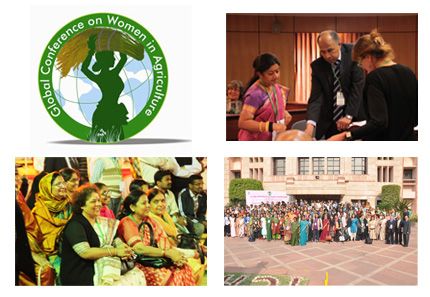 The First Global Conference on Women in Agriculture (GCWA), organized in New Delhi on March 13-15 by the Indian Council of Agricultural Research (ICAR) and the Asia-Pacific Association of Agricultural Research Institutions (APAARI), was supported through the Gender in Agriculture Partnership (GAP) of the multi-stakeholder Global Forum on Agricultural Research (GFAR).
This landmark event was the outcome of two years of intensive partnership building among the many organizations involved in GFAR, including the CGIAR, FAO and IFAD and the Regional Fora. The Conference attracted 760 participants from 50 countries, including Ministers, World Food Prize laureates, representatives of agricultural research, extension and education institutions, gender experts, non-governmental organizations and farmer’s groups, who rallied in Delhi to call for collective action and investment to put the needs of women farmers at the centre of agricultural thinking and practice.
Despite the fact that they comprise around half of the world’s agricultural workforce, women are often not even recognized as farmers and face widespread restrictions on decision making about the basic resource for production i.e. land;  access to productivity-enhancing inputs such as credit, fertilizer, improved seeds and extension;  and control over the produce resulting from their labour and other investment.  For example, whereas women do 75% of the agricultural work in Cameroon they own less than 10% of the land.  Women’s ability to produce enough food is further hampered by the physically exhausting labor and drudgery associated with farming practices that have remained unchanged for generations.
By failing to close the gender gap, the  world is paying very dearly.  For example, according to a recent FAO report[1], opening up women’s access to the resources required to produce, process and market food products yields on women’s farms could increase by 20 to 30 percent. This would raise total agricultural production in developing countries by 2.5 to 4 percent and reduce the number of hungry people in the world by 100 to 150 million people.  A further example from Cote d’Ivoire highlights the impact of increasing women’s income on child health and nutrition.  It shows that the improvement in child health and nutrition achieved by a US$10 increase in women's income would require a $110 increase in men's income.
“The first Prime Minister of India, Pandit Jawaharlal Nehru, once said that ‘in order to awaken the people, it is the women who have to be awakened.  Once she is on the move, the family moves, the village moves, the nation moves.”
Participants at the GCWA recognized that, 17 years after the Beijing Declaration and Platform for Action had identified key obstacles to the advancement of women in the world, gross inequalities still hamper development[2]. National mechanisms for gender equality are facing major challenges in implementing their mandates, including inadequate resources, political marginalization of their activities and weak capacities for coordination, monitoring and accountability. It is time for radical action through concerted efforts to meet the needs of women.
High-level policy discussions addressed the reforms and institutional changes needed for empowering women in agriculture. The conference recognized that it is not sufficient to view gender roles in terms of agricultural field production alone. We must also learn to view agriculture through the perspectives of women, a viewpoint which also emphasizes household food and nutrition security, in particular child nutrition and health, reducing post harvest losses, value addition through on–farm and off-farm practices and increasing efficiencies across the value chain to ease the time constraints faced by women. Linking women, agriculture and nutrition is a vital ingredient requiring multi-sectoral thinking and action to address major nutritional deficiencies that are currently harming children’s development around the world.
Thematic sessions addressed the key areas in which change is required: the empowerment of women in agriculture; agricultural innovations to reduce drudgery; linking women farmers to markets; determining women’s roles in ensuring food and nutrition security; enhancing their access to assets, resources and knowledge and the specific implications of climate change risks. These sessions highlighted the need for fundamental rethinking of agricultural systems and the new roles required of agricultural research, extension, education and enterprise.
A number of priorities were identified by the participants in creating a framework for action. Given that gender inequalities run right through agricultural systems, action is required at all levels from household and community up to national, regional and international scales.
Priorities determined through these discussions were:
These priorities will now form the basis for wider collective action through the Gender in Agriculture Partnership (GAP)—a global initiative organized through GFAR and embracing all the actors involved in addressing gender-related issues in agriculture. The GAP will work to drive forward change and deliver local actions on the ground. Partners in this open and inclusive initiative already include several UN Agencies, the CGIAR, Regional Fora, national public institutions, women farmers organizations, foundations, universities and NGOs.
The GAP was formally launched and expanded upon at the Conference, at which the Government of India publicly pledged their involvement in this global partnership, with the expectation that it will inspire other governments to follow.
Participants agreed there was real value and excitement in this gathering and proposed that this should be repeated in 3 years time (in 2015), to determine and demonstrate progress in the GAP.  The Forum for Agricultural Research in Africa (FARA) has offered to host the next conference in Africa.
When formally closing the conference, the President of India, H.E. Pratibha Devi Singh Patil observed that “There is a deep inter-linkage between women and agriculture, the development of both being essential for the progress of every nation.”
[1] http://www.fao.org/publications/sofa/en/
[2] http://www.un.org/womenwatch/daw/beijing15/regional_review.html