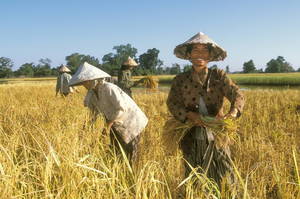 26 September 2016, Rome - The agricultural sector must transform itself not only to achieve food and nutrition security for all, but also to help address global challenges such as climate change and antimicrobial resistance, FAO Director- General José Graziano da Silva said today.

In a speech to ministers, government, private sector and civil society representatives attending the biannual meeting of FAO's Committee on Agriculture (COAG, 26-30 September), the Director-General noted how "agriculture is at the very heart" of a recent series of ground-breaking international agreements, including the Sustainable Development Goals and the Paris Climate Change Agreement.

"Sustainable agriculture is paramount to eradicate extreme poverty and hunger, to sustain natural resources, to adapt to and mitigate the impacts of climate change, to achieve healthier food systems and to build resilience against crises and natural disasters," Graziano da Silva said.

But he noted that while past developments in agriculture have led to major improvements in productivity, "progress has been uneven" and that "greater emphasis must be placed on the social and environmental dimensions of sustainability".

Sierra Leone's Minister for Agriculture, Forestry and Food Security, Monty Patrick Jones, also addressed the meeting, stressing that in Africa boosting agricultural productivity in a sustainable way is not only essential for food and nutrition security, but is also critical to eradicating poverty.

In particular, small-holder farmers "should produce food not just for the table, but also for the market," he said, urging governments to play their part by supporting the process and increasing investments.

"We've seen an increase in investments ... but only a few invest 10 percent" of their budget on agriculture Jones said, referring to a pledge made by African leaders in the 2003 Maputo Declaration.

Another keynote speaker at today's COAG opening, Joachim von Braun, Director of University of Bonn's Center for Development Research, underscored the need for scientific innovation in agriculture to go hand-in-hand with policy reform.

"Agriculture and food systems are transforming, and that must be supported by a sound cooperation between science and policy," von Braun said.

He told participants that for this purpose, an International Panel on Food, Nutrition and Agriculture should be established to assist the international community in the same way as the Intergovernmental Panel on Climate Change(IPCC) "helps guide global climate policy".

Graziano da Silva, noting that the "role of agriculture goes beyond generating food and income," referred to FAO'srecent commitment at the United Nations General Assembly to work closely with the World Health Organization (WHO) and the World Organisation for Animal Health (OIE) to curb antimicrobial resistance (AMR).

"We at FAO believe that antibiotics and other antimicrobials should be used in agriculture to cure diseases and to alleviate suffering. Only under strict circumstances they could be used to prevent an imminent threat of infection," the Director-General said.

Graziano da Silva also pointed to growing international recognition that agriculture can play a transformative role in addressing the impacts of climate change.

Countries are set to gather for the COP 22 summit in Morocco in November to put into motion their pledges on climate change, and FAO "stands ready to assist governments, especially of developing countries to have access to international resources that are available to finance these actions," he said.

FAO support for 245 initiatives in 89 countries

"Results have well exceeded our targets. More than 80 of these initiatives were implemented in Africa alone," the FAO Director-General said.

He noted that within the Save Food Initiative, FAO supported 45 countries in reducing food waste and loss, through a partnership network that includes civil society, the private sector, the UN institutions and academia.

FAO also provided support to 70 countries across five regions to advance the mainstreaming of food security and nutrition in public policies and programmes.

COAG meets every two years to assess the current state of affairs in world agriculture and provide guidance to FAO on its program of work.

This news item is part of a Partner Spotlight on Food and Agriculture Organization of the UN (26-30 September). FAO is a Partner in GFARand a GFAR Facilitating Agency.