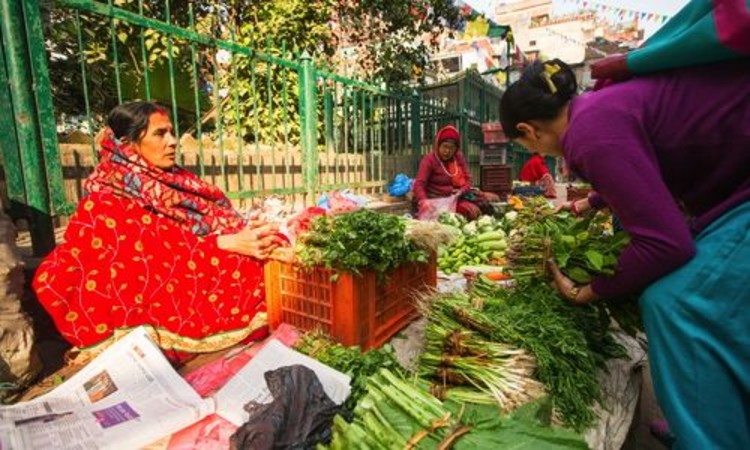 Agriculture is the main source of food, income, and employment for the majority of people in Nepal. But one big hurdle for most farmers is financing. Loans tend to be too expensive for smallholder farmers. They often involve a lengthy application process, and farmers can rarely meet the rigid collateral requirements—rural land is neither recognized nor accepted as collateral by many banks. Without access to credit, farmers often have little opportunity to expand.

In addition, informal credit markets through farmers’ groups can still be important for small farmers. Jal Kanya Farmers Group is a farmers' group in the Dhankuta district and is made up of 21 female members. The group started a monthly savings group, and they now have nearly US$1,000 funded, which they use to make loans to members. After realizing tomato farming can be a good source of income, most of the women in the group have shifted to tomato farming and away from from traditional crops like maize and millet, as part of Nepal’s Commercial Agriculture Development Project (CADP).

CADP is providing training for tomato cultivation, along with seeds of the all-rounder variety, which performs well during the rainy season. Pabitra Magar, a 29-year-old farmer, serves as the secretary of Jal Kanya Farmers Group. She started cultivating tomatoes on 0.1 hectares and is now expanding production to 0.25 hectares; her income is also increasing, and she now makes an average of US$1,150. (NR 70,000) income per year. She also received training on post-harvest technology and is now cleaning, grading, packaging, and selling tomatoes for market. CADP also has provided agricultural tools and other technical assistance for farmers in the district. The farmers’ group now has its own office for meetings and trainings, and the income of all the members has increased significantly, proving that even loans for farmers can have big payoffs.

Written by: Dinesh Panday - obtained his B. Sc. (Agriculture) from Tribhuvan University, Nepal in 2011, and then worked as research assistant at Soil Science Division of the Nepal Agricultural Research Council. He is working as Nepal representative on Young Professionals for Agricultural Development (YPARD) since 2012. Besides YPARD, he is a graduate research assistant (Soil Science) at Lincoln University of Missouri, and a team member of Cropping Systems Coordinated Agricultural Project: http://www.sustainablecorn.org E-mail:ypardnepal[at]gmail[dot]com Twitter: @dineshpanday