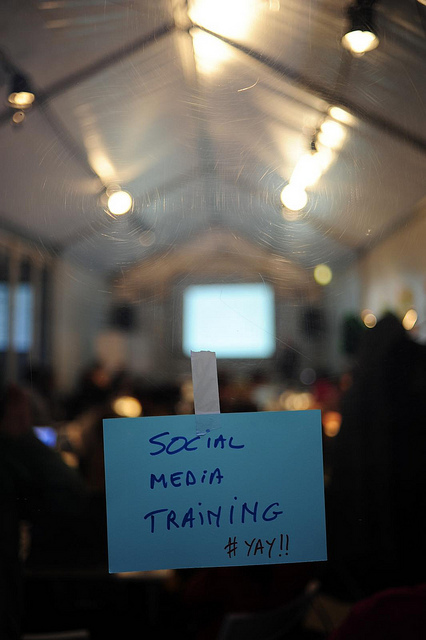 Just before and during the Global Landscapes Forum (GLF) conference, a Social Media Bootcamp was organized by the CGIAR that brought together key social media coordinators from CGIAR, GLF consortium members and partner non-profit organisations and institutes. During a six-day hands-on training exercise, a wide range of practical topics were covered, from technical tools to strategy development of social media and social reporting.
Thanks to GFAR funding, Keron Bascombe, a young professional of YPARD, was able to participate in the training and in the live coverage of the GLF conference itself.
As a blogger and freelance writer, Keron is an active young professional in agriculture seeking a career in agricultural journalism and communications. Having been exposed to the online and digital journalism world, he has developed a passion for writing and social media and has learned that operating in different environments providing practical application, soft skills, and technical know-how offers the richest forms of knowledge.
Keron uses his agricultural blog Technology4agri as a springboard for his work and is guiding its transformation into a social enterprise. Active for over two years, the agriblog is a platform from which he can show users the multitude of technological applications that exist in agriculture and assist in the development of young agripreneurs.
The major challenge to Keron’s advocacy work lies in the limited use of social media for agriculture in the Caribbean region. Although social media is now present in every other industry in the region, there is still much room for growth in the agri sector. In the past year or so this has begun to change as agripreneurs realise the power of technology in their agribusinesses, but there is still room for progress. As a result, Keron’s efforts to advance his career in agricultural communications in local organisations, institutions and the academic community have not been particularly successful.
For Keron, the Social Media Boot Camp was a highly valuable experience. As a social media reporter and enthusiast, knowledge on metrics and measurement tools were of particular relevance. He is now better aware of how to increase the outreach of social media and use data on reach and impact to encourage the use of social media in the local and regional sector, particularly as a consultant, at ag events and within the academic community. Statistical info is highly respected in the university community and can act as a major driving force behind the adoption of social media tools in scientific study and reporting.
Part of the reason for holding the Social Media Boot Camp just before the GLF was so that participants could showcase their work to each other in real time as they reported on the sessions of the conference. Keron’s work as a freelance writer was viewed from the critical eye of other ag communicators, which allowed particular feedback that could not have been achieved without the training. Armed with this knowledge, Keron intends to upgrade his blog with all the suggestions and comments he received during his showcase of his social media outlets and strategy to the other participants in the Boot Camp.
Besides the blog posts he writes, he is confident that the improvements to his blog in terms of design, layout, content organization and visual appeal will raise its overall appeal to the benefit of readers and users in the Caribbean and beyond. Keron is hopeful that the knowledge he exchanged and contacts he made with other professional ag communicators during the week training with help him better link with organisations and help him move forward with a career in the field.
Photo credit: CIFOR