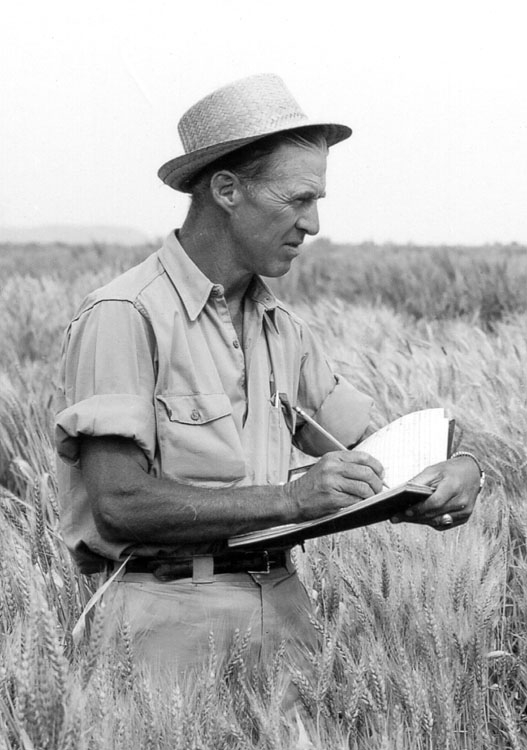 It is very sad for the Global Forum on Agricultural Research (GFAR) Constituency that Dr. Norman Ernest Borlaug (March 25, 1914 - September 12, 2009) is no more with us. Dr. Borlaug was the world’s foremost agricultural scientist and a renowned humanitarian. Dr. Borlaug was one of only six people to have been awarded the Nobel Peace Prize, the American Presidential Medal of Freedom and the Congressional Gold Medal. He was also a recipient of the Padma Vibhushan, Indias second-highest civilian honour and several other awards from all over the world.

Coming from the humble roots of a farming family and a rural upbringing in Wisconsin, USA, Dr. Borlaug received his Ph.D. in plant pathology and genetics from the University of Minnesota in 1942. He took up an agricultural research position in Mexico, where he developed semi-dwarf, high-yield, disease-resistant wheat varieties. This led to the beginning of the Asian Green Revolution and the Indian Sub-Continent becoming more resilient in food production and ultimately becoming net food exporter. Dr. Borlaugs contributions to agricultural development have been estimated to have saved over one billion lives worldwide.

At his acceptance of the Nobel Peace Prize, Dr. Borlaug speculated: "When the Nobel Peace Prize Committee designated me the recipient of the 1970 award for my contribution to the "green revolution", they were in effect, I believe, selecting an individual to symbolize the vital role of agriculture and food production in a world that is hungry, both for bread and for peace" which illustrates his contribution to the world as a scientist and humanitarian.

Dr Borlaug’s ability to inspire young people to get involved in agricultural research and development and to work tirelessly in their endeavour to make agriculture more productive the world over is a legacy we cannot ever forget. Many of us at GFAR had personal acquaintance with him and I am sure all of us would say that he inspired us very deeply.

Dr. Borlaug with John Ruan established the World Food Prize to recognize - without regard to race, religion, nationality, or political beliefs - the achievements of individuals who have advanced human development by improving the quality, quantity or availability of food in the world. I had the honour to regularly attend the various events around the award of this prize and especially in its Youth Programs.

I witnessed through three decades on different occasions the interventions of Dr. Borlaug which resulted to improvement in wheat as well agricultural development. I remember vividly late in 2005 when he phoned me, when I was Director-General of ICARDA, to join with my colleague, the Director General of CIMMYT, the US and FAO in the global initiative to prevent a pandemic and to produce cultivars resistant to UG 99. Now this initiative is known as the Borlaug Global Rust Initiative (BGRI).

He was keen to build capacity of young wheat breeders and he accepted to establish the now Norman Borlaug – Robert Havener Centre for Wheat Breeding at ICARDA to build the capacity of scientists in the Central and West Asia and North Africa (CWANA).

We were expecting Dr. Borlaug to be with us at the Global Conference on Agricultural Research for Development (GCARD) at Montpellier, France in March 2010. We were informed of him not keeping good health just a few weeks ago. We shall miss you, Norman.

Rest in peace, old warrior. You deserve it. But be assured, we will continue your good work.

GFAR welcomes everyone in its constituency to post their remembrances of Norman Borlaug in the GFAR forum entitled "Norman E. Borlaug (March 25, 1914 - September 12 2009)".
We also encourage you to send us photographs, articles, links, or anacdotes in remembrance of Dr. Borlaug, which will be published on this page.


In the photo, Norman Borlaug at field plots during early years in Mexico

Blog entry
15/02/2021
Bill Gates on climate change, CGIAR and adapting to a warmer world
Event
22/12/2020
One Planet summit for biodiversity