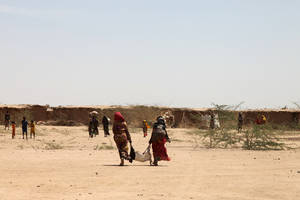 More than 60 million people worldwide, about 40 million in East and Southern Africa alone, are projected to be food insecure due to the impact of the El Niño climate event.

The heads of the three Rome-based UN agencies urged greater preparedness to deal with the possible occurrence later this year of a La Niña climate event, closely related to the El Niño cycle that has had a severe impact on agriculture and food security.

Scientists are predicting an increasing likelihood of the opposite climate phenomenon, La Niña, developing. This will increase the probability of above average rainfall and flooding in areas affected by El Niño-related drought, whilst at the same time making it more likely that drought will occur in areas that have been flooded due to El Niño.

The UN estimates that without the necessary action, the number of people affected by the combined impacts of the El Niño/La Niña could top 100 million.

To coordinate responses to these challenges and to mobilize the international community to support the affected governments, UN agencies and other partners met at the Rome headquarters of the Food and Agriculture Organization of the United Nations (FAO) today. The meeting included the International Fund for Agricultural Development (IFAD) and the World Food Programme (WFP).

Participants noted that almost $4 billion is required to meet the humanitarian demands of El Niño-affected countries and that almost 80 percent of this is for food security and agricultural needs.

The meeting called for action to recover agricultural livelihoods that have been severely damaged by the droughts associated with El Niño. Acting now will ensure that farmers have sufficient levels of agricultural inputs for upcoming planting seasons.

Furthermore, FAO, IFAD and WFP are redoubling efforts to mitigate the negative impacts and capitalize on positive opportunities of a likely La Niña phenomenon in the coming months. This means acting decisively to prepare for above-average rainfall in some areas and potential drought conditions in others.

FAO Director-General José Graziano da Silva warned that the impact of El Niño on agricultural livelihoods has been enormous and with La Niña on the doorsteps the situation could worsen.

"El Nino has caused primarily a food and agricultural crisis", Graziano da Silva said. He announced that FAO will therefore mobilize additional new funding to "enable it to focus on anticipatory early action in particular, for agriculture, food and nutrition, to mitigate the impacts of anticipated events and to strengthen emergency response capabilities through targeted preparedness investments."

"The massive impact of this global El Niño event, exacerbated by persistent poverty and chronic hunger in many countries, threatens the food security of millions of people who are the least able to cope," she said.

"Farms have failed, opportunities for work have evaporated, and nutritious food has become increasingly inaccessible for many communities," Cousin added. "But new humanitarian crises are not inevitable if we invest in support for communities and provide the tools and skills required to endure climate-related shocks."

IFAD Associate Vice President, Lakshmi Menon, reminded the global community not to forget about small-scale farmers, who are the most vulnerable to these extreme weather events. "Small-scale farmers in rural areas are disproportionally impacted by these natural disasters because many of them depend on rainfed agriculture for their lives and livelihoods, and they do not have the capacity to bounce back from shocks. We need to invest in building their long-term resilience so when the next El Niño and La Niña cycles hit, they are better prepared and can continue to grow food for their families," she said.

UN Special Envoy for El Niño and Climate, Ambassador Macharia Kamau said: "It is clear that these types of extreme weather events are stressing already-vulnerable communities, threatening to undermine development gains of recent decades and impede achievement of the Sustainable Development Goals."

He noted that the humanitarian community in partnership with governments and regional authorities have developed a number of plans in order to respond to the current El Niño event, and that these plans are multisectoral and require longer-term, predictable funding in order to ensure they are fully implemented.

For more on this story, visit the FAO website.