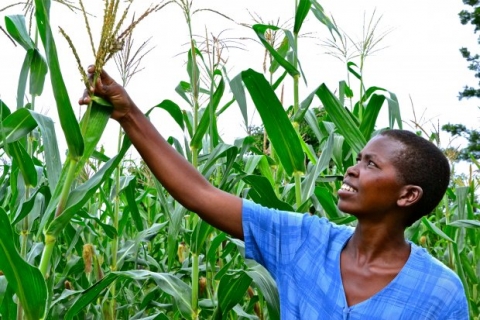 GFAR and Food Tank have produced this new video highlighting how meeting the needs of women farmers equals a better world.

Women are the backbone of the world’s food systems. Across the planet, women and girl farmers play a key role in producing, processing, marketing and retailing food and other agricultural products, and combined with their traditional primary responsibility for preparing family meals and for childcare, in creating a well-nourished world.

On average, women represent 43 percent of the world's agricultural labor force and 47 percent of the global fisheries labor force, according to the U.N. Food and Agriculture Organization (FAO) and the World Bank. However, there are big differences between and within regions and countries, ranging from about 20 percent in Latin America and the Caribbean to approximately 50 percent in Sub-Saharan Africa and East and Southeast Asia. According to FAO, women represent over 60 percent of the agricultural workforce in several African countries and more recently in a few Near East countries where men are increasingly exiting agriculture for more remunerative non-farm jobs.

FAO cites evidence of a yield gap of about 20-30 percent between male and female farmers that is largely due to differential access to resources and inputs. It estimates that closing the yield gap could increase production in developing countries by 2.3-4 percent and reduce the number of hungry people in world by 100 to 150 million. When women have the right resources and tools, they have extraordinary potential!

The video calls upon consumers, business leaders, policymakers, funders, and donors to invest more in women for higher and more sustainable food production, greater nutritional diversity, healthier children, children who do better in school, a stronger economy, and a less hungry world.

Investing in women farmers brings unique multiplier effects. Increasing the share of income earned by women increases their bargaining power within the household, resulting in decisions that lead to better nutrition, health, and education outcomes for children, according to FAO. Similarly, the World Bank stresses that gender equality can lead to increased productivity; women’s control of household resources can improve the livelihoods of the next generation; and empowering women as economic, social, and political actors can result in more representative decision-making.

Among the many examples of women farmers increasingly taking development into their own hands, the Jal Kanya Women Farmers Group in India’s Dhankuta district started a monthly savings group, and they now have nearly US$1,000 in funds that they use to make loans to members, according to the National Sample Census of Agriculture Nepal.

These and related issues were the focus of the First Global Conference of Women in Agriculture in 2012, organized with GFAR support, that brought together women from more than 50 countries to highlight the importance of reducing the gender gap in agriculture.

More investment in women farmers will help alleviate hunger and poverty and will lead to more social justice and empowerment for girls and women. When women earn more, they invest more in the health of their families and their children’s education, thus ensuring vibrant, well-nourished, and happy future generations.