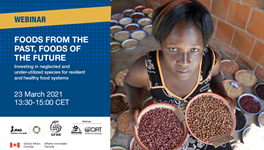 On the 23 March, IFAD—alongside partners Alliance of Bioversity International and CIAT and GFAR—will hold a joint webinar entitled "Foods from the past, foods of the future - Investing in neglected and under-utilized species for resilient and healthy food systems” . The webinar aims to advocate for agrobiodiversity as a strategic asset to fight food and nutrition insecurity, climate change and poverty by harnessing the potential of neglected and underutilized species (NUS), or “forgotten foods”. The webinar will also introduce five new guidelines on investing in NUS value chains, developed by IFAD and the Alliance of Bioversity and CIAT, and share innovative experiences from the Michelin starred international chef, Cristina Bowerman.

GFAR's contribution to the webinar will be to develop a "New Frontier" focusing on those left behind in the knowledge generation processes and in the governance of research, including smallholder farmers and indigenous people.

"New frontier" was a term used by John F. Kennedy in a 1960 conference to refer to the double challenges of the forthcoming decade: continuing efforts towards space conquest and science advances, but at the same time fighting poverty and unemployment for equality of welfare. The term originated from the American frontier which was continuously moving towards the (Far) West during the pioneers' expansion after 1850.

The parallels are striking when we examine the challenges and outcomes of the so-called “Green Revolution" which began after the Second World War. While great advances continue to be seen, there are unexplored territories of knowledge that have been left behind. This information, held by millions of farmers mostly without access to modern technologies, has the potential to produce significant results for agriculture and for mankind.

These smallholder farmers, women and indigenous people have for centuries been generating local innovations adapted to their local context. They have mobilized their own experimentatation and observations and used the lessons learnt to make improvements on their methods: they have been engaging in “informal” science. This has been the case for the selection, conservation and use of local crops that have been defined as "neglected" or "orphan" crops—those which have remained hidden from formal research efforts for decades. Yet, they are deeply rooted in the traditional practices of these local communities and bring them myriad benefits.

Today, the (re)discovery of these crops and of the capacities lying behind them can provide a new resource in feeding the world, as well as the potential to increase the resilience of local livelihood systems in the face of climate change and other rapid changes. However, a number of conditions must be met:

For all these to happen, a fundamental transformation must be enabled to give farmers agency within their food systems. GFAR is facilitating the drafting of a Global Manifesto on Forgotten Foods/Crops that will give voice in a coordinated manner to a number of stakeholders across the globe—with farmers at the center—to orient the needed transformations of research and innovation systems.

Webinar panelists will include a member of the Asian Farmers’ Association for Sustainable Rural Development (AFA), a long-time Partner in GFAR, now mobilizing with several other multistakeholder partners in a Collective Action on Forgotten Foods. Learn more here.

Visit the event page for more information on the webinar and to register: https://www.ifad.org/en/web/latest/event/asset/42486530